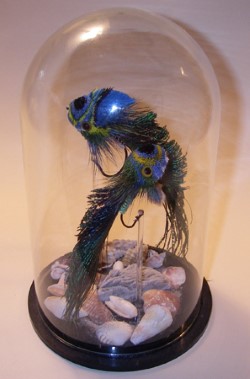 Steve has been involved with fly fishing since his father presented him with a fly fishing kit purchased overseas in the early 1960’s.   About fifteen years ago his wife, Linda, brought him a fly tying kit and he has been tying bass bugs and trout flies ever since.

Spinning deer hair is one of his greatest pleasures as it supplies him with a medium to create one of a kind flies as well as established patterns.  Billy Munn, Jimmy Nix and Chris Helm have been his mentors through their books, videos and magazine articles.  For the last four years, Steve has demonstrated his tying skills in Oregon, Idaho, Montana and California at Federation of Fly Fishing events.  He has tied at the International sportsman’s Expositions in Sacramento, San Mateo and Pleasanton, California.  Steve has also tied at the Fly Fishing Show in San Rafael, California.  Steve enjoys fly fishing the California Delta for Largemouth and Striped Bass.  He also takes pleasure in fishing the neighboring Sierra’s for various species of trout.  He is a member of the Tracy Fly Fishers, enjoying the club functions,

speakers and the camaraderie of its members.  He is a proud member of the Daiichi Pro Team.