This pattern came about in the mid fifties because soft bodied nymphs with partridge hackle are great looking but they are not durable for more than a few fish.  The original pattern had a South American condor stripped wing quill rib over wet lacquered brown floss with three coats of waterproof lacquer over the abdomen area. With zero availability of the condor quill in the late sixties a white floss rib replaces the condor quill.  The floss rib is even more durable than the condor quill thus upgrading the pattern.  This pattern works well during March Brown activity on most streams.  Carl has fished it in Eastern streams, Western rivers and many of his cusomers have used it with great success in New Zealand.  However, this pattern is not just valuable as a March Brown only.  It also works well in streams that have stone fly hatches as well as those with a good crayfish population.  It also works well in ponds and small lakes.  The most productive sizes for this Nymph are #14 – #6.  Having a heavy weighting, it sinks faster in the larger sizes.  Carl suggests fishing this nymph dead drift up stream.  Before strike indicators came along, Carl would grease (using Mucilin TM silicone) the last 10 feet of his line about every 10 minutes using it as a strike indicator.  If the nymph hits the bottom and snags up, he suggests changing to a smaller size to keep the fly in the water column of feeding fish.  The pattern was extensively tested empirically in a number of abdomen colors including green, orange, yellow, red, but the dark brown color was best.  Carl has found this nymph one of the best fish catchers when prospecting for fish with no noticeable feeding activity.  Recipe- Hook: Daiichi 1760 (sizes 14 – 6) wrapped with lead wire sized for hook size.  Thread: Black 6/0 Tail: Brown hackle Body: Dark brown floss, laquered just before rib is wound (this will hold ribbing in place) Rib: White floss well waxed to prevent it from going clear when lacquer is applied Wing Case: Natural goose wing quill Thorax: Peacock herl Hackle: Brown (three or four turns, trimmed off on bottom).  Other Features: For durability, three coats of laquer over the abdomen.

Carl Colman: Is a fly fishing Guide fishing on the Lake Ontario tributaries. He frequently fishes the Oak Orchard creek, Lower Genesee river and Sandy Creek for steelhead from mid March – mid April.  You`ll also find him on the Salmon river in both the late spring and fall.  Carl also guides all year on the Oatka creek and Spring Brook for wild Brown Trout.  Contact Carl at Coleman`s fly shop 585-352-4775 or at www.colemansflyshop.com. 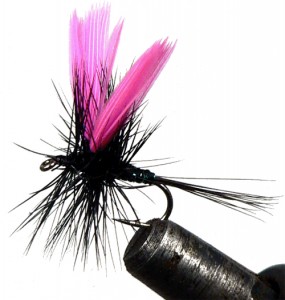 This is Bob Veverka`s recipe from the Stewart/Allen book, FLIES FOR TROUT. Dick tells us he had to substitute a fine-barred teal feather for the pintail in the shoulders. He did not want any ornithologists chasing him down. COUNTERFEITER HOOK: Daiichi 2370 (sizes 2 to 10). THREAD: Black. TAIL: None. BODY: Flat silver tinsel. THROAT: Bright orange bucktailnext to the body, then white bucktail, then a shorter golden pheasant crest feather. WING: Mixed pink and lavender bucktail over which are dun hackles. SHOULDERS: Pintail duck flank and jungle cock. TOPPING: Black crest feather from a silver pheasant (optional)

This is Bob Veverka`s recipe from the Stewart/Allen book, Flies for Trout. Dick notes that in Canada, the landlocked salmon is known as a Ounananiche.  OUANANICHE SUNSET HOOK: Daiichi 2370 (size 2 to 6). THREAD: Black. BODY: Flat gold tinsel. VEILING: Two golden pheasant crests, one above and one below. WING: Two yellow outside of which are two orange and two purple hackles. THROAT: Red schlappen next to the body, then purple schlappen CHEEKS: Jungle cock

Kevin Casey of Bristol Hills Outfitters sent us this shot of his favorite steelhead/salmon treat. See the kind of results you can expect with the “Egg-Citement” by clicking here. Materials List: Daiichi X510 size 10 Rainbow bead Estaz body Diamond braid for the egg

Daiichi Fly Patterns
Comments Off on Matt Supinski`s “Ripple Crush” from the Daiichi Celebrity Hook Ad.
Like
The “Morris Boatman”

THE MORRIS BOATMAN HOOK: Daichii 1260, size 16 to 12. BEAD: For size-16, 3/32-inch black metal bead; 1/8-inch black bead for size-14 and -12. THREAD: Olive 8/0. FOUNDATION: Green or olive wool yarn (you can substitute almost any strands– I’ve used vernille successfully). LEGS: Fine black rubber-strand (medium-size is too stubby) or Flexi Floss or Super Floss. BODY: Green to dark-green Flashabou or Krystal Flash. BACK: Teal feather. SHELL: Epoxy glue or Loon Outdoors`s UV Knot Sense over the entire body (but not the bead or legs). TYING THE MORRIS BOATMAN 1. Put the bead on the hook. The small end of the hole should be forward, against the hook’s eye. Start the thread behind the bead and spiral it tightly back until it is directly over the hook’s point. 2. Wind the thread tightly forward to the bead. Bind the end of a section of wool yarn along the far side of the hook’s shank. Bind the wool along the side of the shank back to just past directly over the point, only about 1/32-inch (on a ruler). Trim off the yarn closely right behind the bead. Trim off the yarn closely in back. 3. Bind another length of yarn along the near side of the hook and trim it, just as with the first section of yarn. 4. Bind another section of yarn on the far side of the hook from the bead back to just short of directly over the point. Bind another length of yarn on the near side of the hook, same length. Trim the ends of the yarn as before, very closely. Now there should be two layers of yarn along each side–none underneath and none on top. (For a size-12 hook, three layers of yarn along each side. The final third layers should extend back about 2/3 of the way down the first lengths. 5. Cover the cut rear end of yarn and all the yarn with thread-turns. Build a little thread-nub at the rear of the yarn. 6. Strip most of the good fibers from each side of a teal feather. Bind the fibers by their tips over the top of the yarn-underbody. The fibers should spread over the end of the underbody a bit, so they cover the top of it later. Do not bind the teal fibers beyond the thread-nub–if you do, the flashabou will keep slipping down the end when you try to wrap it forward. 7. Bind one full strand of Flashabou by its end atop the yarn underbody so the Flashabou extends off the rear of the underbody–but the bindings for the Flashabou shouldn’t go past the thread-nub. 8. At the center of the underbody–just slightly forward of halfway between the rear of the bead and the underbody’s end–bind a section of rubber-strand atop the underbody with crisscrossed turns of thread. Use thread-wraps to angle the strands back slightly. 9. Advance the thread to the rear of the bead. Pull both ends of the rubber-strand forward and bind them (temporarily) wt. a few light turns of thread. 10. Wind the Flashabou strands flatly up to the rear of the rubber-strand legs. Back off the thread-turns holding the legs, freeing the legs. Wind the Flashabou in front of the legs to the rear of the bead–now all the underbody (except the thread-nub on the rear end) should be covered with flashabou. 11. Bind the end of the Flashabou; then trim the Flashabou closely. Pull the teal up over the top of the body and bind it at the bead. Trim off the end of the teal closely, and then bind it with thread. Whip finish the thread and then cut it. 12. Mix some epoxy glue and work it (or Loon Outdoors`s UV Knot Sense) into a collar over the thread, just behind the bead. Work the collar of epoxy back over the body, add more as needed until the body is completely covered, including the thread-nub on the end. The epoxy should be just thick enough to coat the body and make it smooth and glassy, but no more than this. Put the fly in some kind of turning wheel for the epoxy to cure evenly. Once the epoxy is set, trim the legs to equal about ¾ of the total hook-length. (Or you can trim the legs to length before adding the epoxy.

Daiichi Fly Patterns
Comments Off on The “Morris Boatman”
Like